Things are Coming Together

Today the team accomplished a lot.

The field elements team started construction on the goals and is almost done with one side of the goal so far.

The build team attached the lift and the catapult together using a four-bar linkage. They are working steadily to construct a winch mechanism to prime the catapult. They are attaching the pneumatics as I type. A small team is also working on creating bumper covers. This year we plan to make the bumpers more easily switchable which is an engineering feat in and of itself.

The programming team flashed the cRIO with the new 2014 image and calibrated the ultrasonic sensor to aid the driving team.

The balls are flying as we continue to test our catapult. Today we are experimenting with loaders and how to get our loader into position without exceeding our 20 inch limit. The scoop has to be able to go from on top out robot to on the side of our robot. We are looking into using four bar linkages to do so. The chassis team is hard at work attaching the battery, bumpers, and the wireless router to the base of the robot. The build team is also working on the winch to crank back the catapult. Today we worked more on pneumatic systems to power both the loader and to release the launcher. We are experimenting with the ultrasonic sensor, we plan to use it to aid the drivers depth perception. The programming team is working on a lot of projects like running code on the robot, testing the ultrasonic sensor, and working on the website.

Yesterday we worked on the robot at our mentor Jeremy’s house due to school being closed. We experimented with four bar linkages and tested the maximum torque of our robot pushing a couch with teammates on it.

The torque test video is on our YouTube channel here.

On Saturday members of the Highland Park Robotics Team attended a summit meeting at Como Park High School to discuss strategy with out St. Paul teams. From this summit many teams received help with any issues they had been having with their robots. Back at school though our team was working away at building the robot. The team did many things as our build team captain summarized towards the end of the day saying :

“Chassis Team: Drive train is functional, and the wiring is complete. as of right now the right encoder on the gearbox is not functional, but this might change before the end of the meeting. the bumper mountings are done, and the noodles are being secured. the cloth covers are not done and plans are being made to make them.

Launcher Team: finished catapult assembly and performed a test fire! (Woo!) Made concepts for a quick release mechanism. worked on how the forklift will work and futzed with lots of ideas.

Next meeting: Determine appropriate width for catapult frame to allow attachment and movement of fork assembly and cut to size.  Work towards finalizing fork design.

Pneumatic Team: worked on concepts for the pneumatic lifting system for the forklift. tried to find a trigger release. settled on four bar linkage for loader movement. adding a spike relay.

Robotics is in full swing!

Everyone is working away at building programming and driving. The programming team is playing with vision code trying to connect the raspberry pi to the network and decrease the latency on it. Build team is adding bumpers to the chassis and deconstructing the pre-season beverage fetching bot. The drive team is practicing their maneuvers and trying to encourage everyone to have a try at it.

Today we made a lot of progress in designing and building our robot. The robot has a ramp on the front and two wheels on either side that help pick spin the ball up on top of the robot. We settled on this designed after much controversy on many topics like how we should carry the ball, how we should launch the ball, how we should pick up the ball. But in the last hour of practice a small group came up with a succinct design that incorporated the best of both designs. 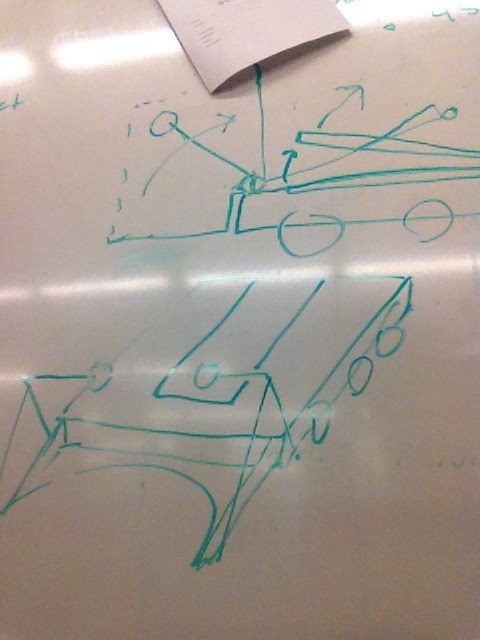 We plan to add to our design and continue revisions of it throughout the build process.Today we also built the stock chassis that we purchased through FIRST now we just have to wire it up. The business team worked away at finding and emailing possible sponsors and sent messages to some 50 possible sponsors. Last but not least the programming team worked on the network code for the raspberry pi. we plan to use the raspberry pi to run vision code that had previously been too large for the FMS.

Tuesday afternoon the highland park robotics team went virtual. With school having been canceled, due to weather, we took to the interwebs in order to be productive on our day off.

We divided into business team and build team for the first half where we things specific to our teams. Later we came back together as a team and discussed then the programming team went onto their own channel. Over the course of our chat we decided that we would test impulse vs catapult, groups and leaders. The programming made progress on ultrasonic sensors. The business team made a list of business that we wanted to contact about possible sponsorship.

Today a small group of robotics members met today at the hack factory to prototype chair ideas. we found a stretchy cloth material and then constructed two y shaped frames to hold the cloth between.

We tested scooping, launching, and catching. We found that the cloth creates a better scoop because it gets lower to the ground than the chair. We found that when launching a lot of force is need to launch the ball from the frame to a goal. When catching we found that we will need to allow for some give in the mechanics of the frame so that the force from catching the ball is dissipated. with the rigid wooden frame part of it broke and so future constructions will have to be made out of metal with rubber or elastic spacing to allow for motion between the connection of the frame.

Today we made plans for how we should approach the competition. The team met at mentor Jeremy’s office Code Weavers at 1:00 PM and we stayed and made plans for this year until 4:00 PM but many members stayed later still filled with fervor. The team made great progress even simulating the game with humans pretending to be robots to get a feel for what strategy is the best. We considered many strategies whether we should be defensive, offensive and whether we should try and shoot goals at all. In the end we came to a general consensus that what we wanted was to be a team that could score points without dependency on our teammates in the event that they were disabled or we could fall in line and work well in a team. Our priority list though was soon scrapped when we found that a collapsible chair was an extremely versatile tool that we could use. The chair can clamp the ball, hold the ball, roll the ball, catch the ball, and the loose material the chair is made out of allows for it to be hit from behind and shot into the air.

Yesterday was a day filled with face-paced learning, excitement, innovative ideas, and of course, loads of fun. Our Highland Park Robotics Team hosted Central High and Open School teams for robotics kickoff. The day was a grand success. After watching the newly released game video, called Aerial Assist, members from all three teams shared thoughts and talked strategy. As a rookie team, Open School students were able to ask questions of longtime Highland Park and Central High team members and understand the kickoff process. Teams mixed it up into groups to collaborate on the black box exercise, a brainstorming session that starts robot creation by concentrating on the abilities that the robot should have based on a strategy of choice. At the end of the day, everyone left kickoff feeling excited and full of ideas for this season. Hopefully as the season continues, our relationships with Open School and Central High will continue to grow close and be a source of learning.

Did you know we have a YouTube channel? We do! http://www.youtube.com/user/highland2823. Now watch our latest videos from practice on January 5th!

HP Robotics is a 501(c)3 nonprofit. All donations are tax deductible.